The film opens with Picard’s nightmarish memories of being assimilated by the Borg and made into Locutus. 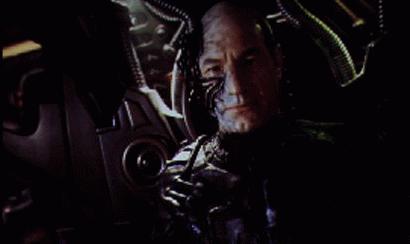 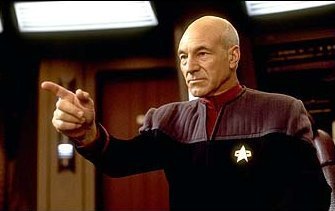 He awakens in his quarters, aboard the Enterprise-E, to an incoming hail from Starfleet command. Picard is about to be told about a report of an incoming Borg ship from DS5, but Picard knows.

He can feel it. He still maintains a slight connection with the Borg, a connection that frightens Starfleet enough to send the Enterprise to patrol the neutral zone, to take part in the massive fleet being assembled, and make sure no Romulan ship tries to take advantage of this invasion. 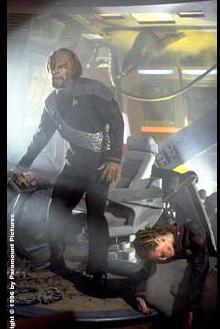 Picard follows his orders grimly, much to the dismay of his crew For the past 6 months, the new Sovereign class Explorer has been on a shakedown cruise, testing her new systems. At the border, Picard and company listen on Starfleet channels as the battle wages on. One Borg Cube attacks and breaks through to Earth.

Picard decides to hell with orders, he sends the Enterprise to Earth, maximum warp. At Earth, dozens of Starfleet ships, led by the Defiant under Worf’s command, try and hold the ship back, but to no avail.

The Defiant is about to be destroyed as the Enterprise arrives, opening fire on the Borg and beaming the Defiant crew off before it explodes. 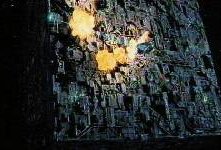 Picard takes command of the fleet and using his knowledge of the Borg, has the entire fleet target a specific area of the ship. All weapons fire and the Borg ship explodes.

The Federation has won. Or so they think. From the wreckage, a spherical ship shoots out, headed straight for Earth.

Enterprise follows her in as the Borg sphere creates a temporal vortex and disappears. The Enterprise is caught in the backwash and spared the changes in the time-line. The fleet disappears. Earth changes into a Borg world, supporting 35 billion Borg drones. The Enterprise barely makes it into the collapsing vortex before five Borg cube ships can destroy her.

The Enterprise arrives in the mid-21st century; March 6th, 2063 to be exact the day before the first warp flight and subsequent first contact with the Vulcans by Zephram Cochrane. The Borg sphere appears over Resurrection, Montana and attacks. The Enterprise is barely able to stop it with her phasers. With the Borg threat extinguished, Picard sends down officers to make sure history wasn’t entirely screwed up. 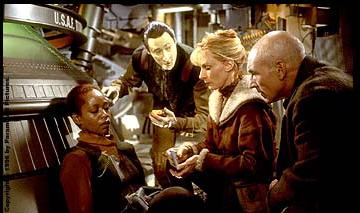 On the surface, Picard, Data, Troi, and Crusher find the launch site of Cochrane’s ship, the Phoenix. They beam up an injured woman, Lily Sloane, who is Zephram’s assistant and mustn’t die. The phoenix took damage so Picard has Riker and Geordi beam down to repair it. Unfortunately, to get Zephram to cooperate, they must reveal themselves to him and they find such a revered historical figure can act quite differently (in a negative sense) than what their history books taught them. 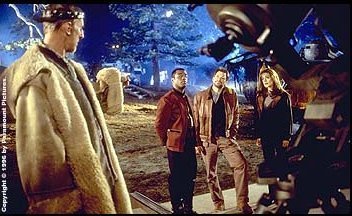 Picard, Crusher, and Data return to the Enterprise with Sloane. Aberrations in the environmental system lead to the discovery of a new threat within the Enterprise. The Borg weren’t killed in the sphere explosion. They beamed into the Enterprise’s lower decks and are beginning the process of assimilating the Enterprise and her crew, from the inside out. Everything below Deck 22 is taken and power is shut down. Crusher and Sloane are trapped behind enemy lines and are feared to be assimilated.

Crew members trapped there are immediately assimilated, turned into drones who attack their former crew mates. Data is able to encrypt the computer system to prevent access by the Borg, but they are quickly gaining the upper hand. 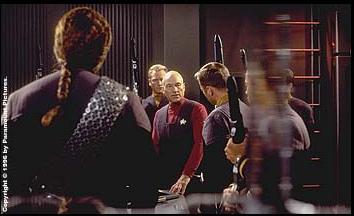 Picard leads an attack force comprised of Data, Worf, and several security guards into the bowels of the ship, which now resemble more of a Borg ship instead of the Enterprise. A battle in engineering claims the lives of many of the security force, Data is captured, Picard is trapped below decks. Only Worf and the rescued Beverly escape.

Picard finds Sloane and has to work with her to get to the bridge. Data is strapped to an assimilation table and is worked on by Borg drones. It is here that Data comes face to face with the driving force behind the Borg, the Borg Queen. Data, who can now turn his emotion chip on and off, is able to fight back, but finds it difficult when the Borg Queen beings to make his dream of becoming human a reality.

While using a Dixon Hill holodeck program to escape the Borg, Picard and Lily get to the bridge, just as Worf and Crusher learn that several Borg drones have left the ship and have begun to alter the deflector dish to send a message to the Borg of this time period, “Attack Earth”. Picard leads another security force outside the Enterprise to destroy the deflector.

On Earth, overwhelmed by all that he has learned of his future life, Zephram escapes the crew and tries to run away, but Geordie and Riker bring him back with much trouble. Only Troi is able to talk him down using a very unorthodox method.

On the Enterprise, Worf and Picard are able to destroy the deflector after a zero-G fire fight with the Borg. But, the Borg still possess a threat. The only solution is to evacuate the Enterprise and scuttle her. Picard begrudgingly accepts this and with Worf and Beverly, arms the self destruct system. The ship is evacuated, but Picard stays behind, intent on confronting the terror that has dominated his life for so long.

On Earth, Riker and Geordi assist Cochrane with the launch of the Titan. Upon seeing the stars in Earth orbit, Cochrane realizes his lofty and greedy goals of capitalizing his warp engine are futile to the possibilities the engine could hold for reshaping Earth, just as Riker, Geordi, and Troi have said. Things are made a little difficult to accomplish this as the Enterprise starts looming closer and closer. 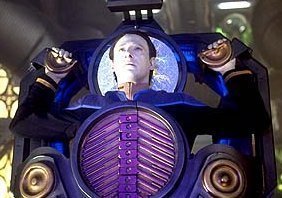 In the engine room, Picard confronts the Borg Queen, an entity Picard encountered before, when he was known as Locutus. We learn here that Locutus was made to be an equal to the Queen. The Queen is the only individual, the oldest Borg in the collective. The drones are her inner workings, the cube ships, her grasping hands. Picard trades himself for Data, now fully human, now able to feel true physical pain and pleasure. But Data has submitted to the Queen. He deactivates the self destruct, takes out the encryption lockouts on the computer, and locks phasers on the Phoenix.

It appears all hope is lost, then Data fights back, ending the ruse. Picard and Data blow out the coolant feeds, belching out substance that melts away the biological components of the Borg. Data says: “Resistance is futile” (worst line delivery ever), takes the Queen and holds her in the stream.

Data loses his human flesh (a part of his face and a part of his arm), revealing his endoskeleton, but kills the Borg Queen, ending this newest Borg menace. The Phoenix successfully makes the warp jump.

On Earth, Picard and crew watch from a safe distance as Cochrane and Sloane make the first contact with the Vulcans, essentially the birth of the Federation. They return to the Enterprise and warp back to the 24th century.

An opinion of Xena season five
Next Post: Is Ares Xena’s Father?