In the original scheme of things Angel was planned just to appear in that pilot episode, but Boreanaz’s on screen appeal fired Whedon’s imagination. The character popped again in episodes four and five, Teacher’s Pet and Never Kill a Boy on the First Date, before putting his cards on the table in the seventh story, the titular Angel. Finally, we learn the truth: Angel is 240 years old, a vampire sired by Darla, who was cursed with a soul when he killed a Romany gypsy woman 80 years ago. It would be a long journey, marked by love, death and the return of Angelus, before the stage was set in 1999 for Angel’s own series.

To Hell and back

Boreanaz recalls that he was working on Becoming when the news broke that Buffy would be getting its own spin-off show. That two part second season cliffhanger, which saw The Slayer finally dispatching Angelus by sending him to Hell, could have seen the end for the character. But Whedon saw it as a whole new beginning…

“Joss called me up and talked to me about it,” offers Boreanaz. “He said he had an idea for this show about this guy who’s working out his inner dilemmas and moves to Los Angeles and he’s fighting for other people’s souls. It was amazing to see because he was in the middle of shooting and he exploded with ideas. When you get a writer who explodes with ideas it’s great: it’s like he couldn’t stop thinking of stories and lines.”

Whedon had a whole year to set the foundations for Angel. He brought the character back from Hell, his soul now restored, and confronted his sense of guilt in stand out episodes like Amends. Over the course of the season, Angel and Buffy would grow closer together and then move apart, as realization finally dawned that their love could not be consummated. When we last saw the vampire in Graduation Day Part II, he was standing in the distance, taking one last look before moving on. When Angel begins, the vampire is making a new life for himself in Los Angeles a place ironically dubbed ‘City of Angels’.

“He’s still tortured, he’s still frustrated, he lost Buffy,” explains the actor. “But at the same time he didn’t lose Buffy; they’ve just separated for a while. Their characters are going to be split up and I think that where Angel is right now, he’s going to go out and save some people. He’s thinking he’s doing it for the right reason, which we see in the first episode.”

The pilot finds the solitary, brooding Angel’s first meeting with Doyle (Glenn Quinn), a half demon Irishman who can foresee people in trouble. Also joining for the ride is Cordelia (Charisma Carpenter), now attempting to make a career in Hollywood as an actress and failing miserably. Their influence will help Angel develop from the introverted, Angst ridden loner whose only desire is to make good for his evil deeds.

“Doyle is like, ‘No man, you’ve gotta mix it up with humanity get out there and get involved’. He’ll atone for his own sins, which everyone has to atone for. Doyle has some to atone for. Cordelia will have something to atone for. It’s about good, the human condition… finding out something about somebody that you didn’t know and why people do certain things to certain people.

“Angel’s reality is that he’s cursed moving to a city that has no reality whatsoever. I think the difference between his environment and who he is is gonna set up some really funny, funny scenes.” 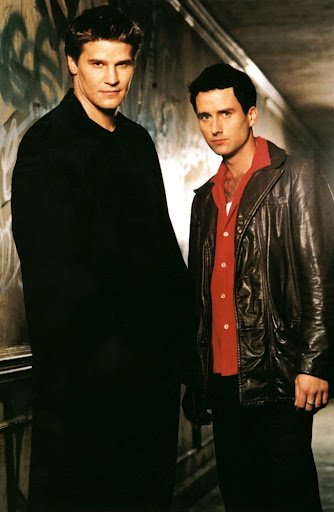 Boreanaz admits that he is delighted by the character mix in Angel – particularly Glenn Quinn’s turn as his semi-demonic co-star.

“He walked into the room and right away we knew it was definitely going to be a good thing,” says the actor of Quinn’s casting session. “We loosened it up and had a lot of fun. That’s what I look forward to – loosening up Angel’s character a bit.”

Whedon has described Buffy and Angel as two aspects of one franchise – a concept the WB have obviously embraced, broadcasting the shows in tandem on Tuesday nights. That given, how will Angel establish its own unique identity?

“It’s an extension but at the same what’s really going to separate the two shows is that this is Los Angeles, it’s not college,” Boreanaz insists. “Buffy’s going to college, she’s just got out of high school. I’ve been around for 244 years and I’m now able to spread my wings out in LA. This is the real world.”

Whedon certainly has plenty of elements to play with in his spin-off series. If the vast sprawl of Los Angeles did not offer enough story potential, then there is Angel’s (and, of course, Angelus’s) own 244 year past, much of which remains untold.

Asked to comment on playing both the good and evil sides of this one man, Boreanaz concedes he prefers neither one nor the other.

“I like both of them,” he says. “Everybody loves to play an evil guy but those are char­acters that you really embrace and go for. I think the show will be able to use both as­pects but keep it at an even keel. Now I’ll be able to be in Buffy’s shoes and fight these evil demons and monsters and put them away, my evil side will come out as far as the aggressiveness is concerned but I do keep it at bay. I do enjoy playing his good side. I like his vulnerability and emotions. So they go hand in hand.”

Like Buffy, Angel will contain story arcs – indeed one arc, featuring the rebellious vampire Spike (James Marsters) will be embraced by both shows. Angel will also get a new love interest played by Elisabeth Rohm, but where that story is leading is not yet clear. Whedon plays his cards close to his chest and even the cast are not informed of their character’s futures.

“It would be great if we got a script two or three weeks before,” Boreanaz shrugs. “Usually you get a finished script, if you’re lucky, four days before we start shooting. I don’t have any say and I kinda like not knowing what’s going to happen and seeing what unfolds. I think it’s better that way.”

With Boreanaz now one of the WB’s hottest young stars, the days when he could quietly walk his dog are gone for good. He’s the cover idol of dozens of magazines, the subject of countless web sites and he gets mobbed at public appearances. The actor is fast becoming a phenomenon, but he takes fame in his stride.

“It’s like when you used to hit a home run in a baseball game I guess,” he ponders. “There’s a bit of a joy to it, but you put it into per­spective and understand what it’s really all about. It’s part of what you do: I work on a show that’s successful, I’m blessed with it and it could be all over tomorrow. Life is too short and too fragile and what you have to do is love every moment of it. I learned that from my parents and my friends; I am who I’ve met in my journeys and I’ve met great friends and family who have shaped me to who I am today.

“I was hanging out with a good friend of mine from New Jersey who I haven’t seen in seven years, I went to school with him. We sat down and picked up at the same ex­act spot we left our conversation and that, to me, is what life is really all about. It’s real simple. If you’re out here for the fame and the notoriety of it, then you’re in it for the wrong reasons.”

Like Angel himself, Boreanaz refuses to be absorbed by the trappings of Hollywood. But does the actor share any of the vampire’s broodiness? Does he, like his screen coun­terpart, even feel like the outsider?

“I guess in a way,” he reveals. “When I was growing up my father was in television and I travelled around with him. Sometimes I felt I was outside, looking in.

“I think everyone is a bit of an outsider in some way.”

Buffy and friends and the original Scooby Gang
Next Post: Xena Warrior Princess: The Rift Arc